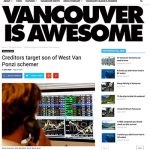 The popular online publication Vancouver Is Awesome, and the North Shore News have published a new article on the latest development in the on-going story regarding Virginia Tan.

Last year, Tan admitted to fraudulently raising at least $30 million from investors as part of a Ponzi scheme. The admission was part of a settlement with the BC Securities Commission.

This latest story covers details of a lawsuit aimed at Tan’s son.  The story, by reporter Jane Seyde, explains:

Bankruptcy trustee Boale, Wood and Co. filed a notice of claim against Marcus Soon-Keen Tan of North Vancouver, alleging six properties he acquired in connection with a real estate development in Surrey since 2011 were bought with funds his mother defrauded from investors.

The bankruptcy trustee is asking the court to transfer ownership of the properties to the trustee for the creditors’ benefit or for Marcus Tan to pay back investors whose funds were allegedly used to buy or make payments on the properties.

The trustee has also asked the court for records tracing money received by Marcus Tan from either of his parents and for assets bought by him with funds from either of them.

No statement of defence has been filed and none of the claims have been proven in court.

You can read the story in Vancouver is Awesome,  or on the North Shore News online.