How will my spouse be affected if I file a Consumer Proposal or a Bankruptcy? 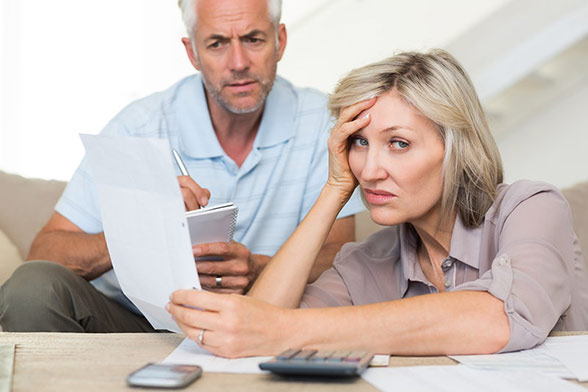 This is a question that we are constantly asked.  Each wants to know how it affects the amount that is owed by the filing spouse, how income is affected and taxes.

This starts with the misunderstanding that each spouse is responsible for the others debts.  While this may be an issue in family relations matters, it is not an issue between spouses as it relates to each others creditors.

Each spouse’s debts are their individual responsibility. Credit bureaus track what individuals owe, and their track record of repayment, by each person’s unique social insurance number. So, if one spouse misses a payment on one of their own debts, that failure to make the payment of an amount owing in a timely fashion will not impact the other spouses credit rating.

Where things can get tricky is when both spouses are responsible for the same debt, a joint debt.  That means either co-borrower, joint borrower or guarantor. Each spouse will be responsible for 100% of the debt if the other spouse files for either a consumer proposal or a bankruptcy.

The non-insolvent spouse is not legally required to disclose their income to the LIT.  But what this means is that the LIT is then required to apply the Income Standards differently than if the non-insolvent spouse discloses their income.  This would apply in a bankruptcy and when the LIT is preparing an analysis of the comparison between the return between a hypothetical bankruptcy and a consumer proposal.

Should the non-insolvent spouse not disclose their income, the LIT then must apply only 50% of the family unit income standards.  This usually results in the insolvent spouse paying more money throughout the bankruptcy or making higher payments in a consumer proposal than they might have to pay otherwise.  In other words, disclosure of the spouse’s income will usually save them money.

In our view, it is always better to disclose all of the family units’ income as it will usually save the insolvent spouse money.

What happens if you get married or move in together during bankruptcy?

Another area where ones spouse could be affected is if you get married during bankruptcy.  The LIT would then have to apply the income standards for a family of two pro-rating the bankrupt’s income vs the spouse’s income.  Should the spouse choose not to disclose their income, then the Trustee would then apply fifty percent (50%) of the Income Standard for a family of two.

Moving in together and living common law is different.  Canada Revenue Agency rules stipulate that a common law relationship does not occur until you have been living together for twelve months.   Most LITs follow this rule when applying the income standards as the income Directive is silent on this matter.  As well, if you have children together you would be considered common law the moment you move in together.  Again, the income Directive is silent on this matter so most LITs look to the tax rules to apply income.

One of the requirements of filing your taxes is to disclose your spouse’s income on your tax return.  Many people have the misconceptions that if you file taxes together it costs you more in taxes.  It doesn’t.  In fact, if your spouse has very low income it could save you money.  What it does affect are benefits such as GST credits, provincial tax credits, Canada child benefit and so on.

Couples who don’t disclose their spouse’s income and are claiming benefits based on their individual income can be reassessed for any overpayments that they have received.  If one spouse claims the children and receives Canada child benefits based on one income, they can be reassessed.  That means all future benefits would be cut off until the debt has been repaid.  And the penalties and interest are punitive.

In the alternative, any benefits that they are entitled to would be delayed until CRA matches up the family incomes.

If you would like to know exact details of how a consumer proposal or a bankruptcy would affect you or your spouse, call us at (604) 605-3335 to schedule a free consultation.

Call us.  Its not too late.