The Office of the Superintendent of Bankruptcy recently issued a report on Ten-Year Insolvency Trends in Canada.  The ten year period covers 2007 – 2016.  The statistics show that the trends have been fairly steady for the last 10 years with the exception of the recession of 2008 – 2009.

In BC, consumer insolvencies since 2011 have remained fairly constant as follows: 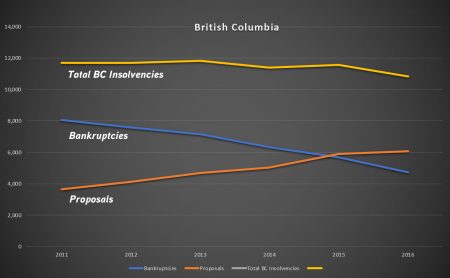 As is apparent, although the number of filings remains constant, the number of proposals has increased from 31.14% in 2011 to 56.32% in 2016.  This is slightly ahead of the rest of Canada but in line with all statistics across the board.

All numbers are expressed as a percentage of consumer insolvency filings.  Of particular note is the upward trend in 18 – 24 age group and in the 65+ age group. 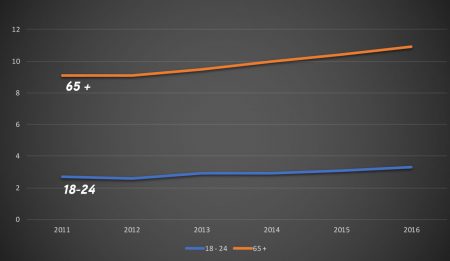 In terms of gender, slightly more males than females filed for insolvency throughout the period, a trend consistent for both bankruptcy and proposal filings.

One statistic that should be of no surprise to anyone is the fact that consumer debt loads have been rising since 2007.  The Bank of Canada has stated on numerous occasions its concern with the debt levels consumers are carrying and the trend towards rising interest rates.  Overall, declared liabilities in 2007 were approximately $7.5 billion rising to $15 billion in 2016.  In 2016, this averages out to slightly less than $120,000 per insolvency throughout Canada.

The table below illustrates the average debt load of consumers between 2007 and 2016 segregated between bankruptcies and proposals. 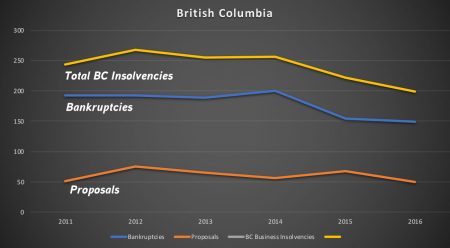 The report hasn’t provided much more insight than what Licensed insolvency Trustees in BC already know, that consumer insolvency filings have been fairly steady in recent years and business bankruptcies have decreased substantially.

The report has been published on the OSB website and can be found here.