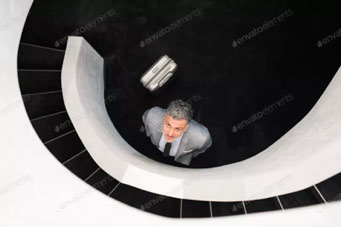 Often the best solution is communication.  Everybody feels a little better and appreciates knowing what’s going on even if it’s bad news.  At least you are trying to deal with it and not trying to avoid them.

Everybody wants a solution.  Prior to calling try to have a plan in place to deal with the debt.  Think about how you are going to deal with the complete debt load and make sure that your budget is realistic.  You don’t want to make payment commitments that you might not be able to fulfill.

Whether it is simply asking for more time or a temporary reduction on the interest rate, it is usually better to communicate than to avoid.

This is often a very misunderstood option.  It sounds good but make sure it is the right option for you.

Firstly, do you qualify for a Secured Line of Credit or refinancing?  The rules have recently changed for qualifying for mortgage making it harder to qualify.  Secondly, it is important to look at the true cost of the loan over the entire term.  If you refinance your mortgage and are making payments over a 20 year period, the true cost to repay the debt can be quite high.

If you are looking for a debt consolidation loan, the Bank may want a co-signor.  Be careful and try to avoid getting another person involved.  Keep in mind that even if the monthly payments are lower than what you are paying right now, the new payments might still be more than you can afford.  If you have a co-signor and find that you are unable to repay the loan, the co-signor will be fully responsible for the unpaid debt and failure to pay will affect their credit rating.

Just because you are consolidating your debts in to one payment, this doesn’t resolve the indebtedness.  You still owe the same amount of money, but you simplified the monthly payment.

A Debt Management program is an agreement between a debtor and the creditors that addresses terms of the outstanding debts.  A DMP is generally administered through by accredited credit counsellors.  A counsellor will work with the debtor to try to develop a plan to consolidate all unsecured non-government type debts into one monthly consolidated payment often with little or no interest.  The program is designed to pay all debts in full or a specific period, generally 5 years or less.

A proposal is an offer to creditors to pay a percentage of what is owed over a specific period of time, or to extend the amount of time to pay off the debt, or a combination of both.  Creditors vote to accept or reject the proposal.

There are two types of proposals:

Once all the terms of the proposal are met, the debtor is legally released from the debts included in the proposal.

Both consumer or commercial proposals is a formal statutory process administered by a Licensed Insolvency Trustee (“LIT”) such as Boale, Wood & Company Ltd.  A Consumer proposal is an offer by yourself to your creditors to repay a portion of all of your debts as full and final settlement of the debt.  The term or length of time the proposal settlement can not exceed 5 years.  As a general rule, the recover of the Proposal must be better than the creditors would otherwise receive in a bankruptcy scenario.  The Proposal is developed with the LIT to deal with such issues potential wage fluctuations, seasonality, taxes and other items.

Government debt, including outstanding income tax and student loans, can be included in a proposal to your creditors.  If you have a student loan and have been out of school for less than 7 years, student loans can still participate and receive dividends from the proposal, however any unpaid amount will still be collectible once the proposal has been completed.  Further, Student Loans will still be able to charge interest on the account during the proposal.

A formal proposal to your creditors, filed under the Bankruptcy and Insolvency Act, provides a debtor with automatic protection from their creditors while a payment arrangement that is agreeable to both the debtor and the creditors can be formulated.  This protection is unique to the options provided under the Bankruptcy and Insolvency Act and can protect you from having your wages garnisheed, your assets seized, or bank account frozen.

Bankruptcy is a legal process designed to relieve honest but unfortunate debtors of their debts. It is a formal statutory process with various requirements to fulfill during the administration.  These include but are not limited to providing monthly income expense reports together with proof of income, 2 mandatory counselling sessions and assistance in providing documents to file the current and prior years income tax return.

At the end of the process, the bankrupt is released from the obligation to repay the debts they had when the bankruptcy was filed (with some exceptions).

Bankruptcy is often viewed as a last resort and most people have an instant reaction to just the word. The decision to file for bankruptcy should not be taken lightly.  However, sometimes bankruptcy can be the best option depending on your circumstances.

The Licensed Insolvency Trustees at Boale, Wood & Company Ltd. can look at your situation and advise you of the best option for you.